Part 3 of the virtual exhibition “A Window to Our Past” is now available for everyone to see! If you are interested in history, vintage design and greeting cards, you are welcome to visit the previous thematic exhibitions: 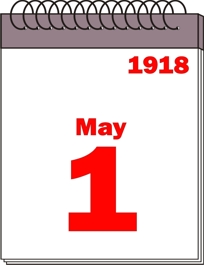 May Day was celebrated illegally in Russia until the February Revolution enabled the first legal celebration in 1918. It became an important official holiday of the Soviet Union, celebrated with elaborate popular parade in the centre of the major cities where thousands of people would gather, holding red flags, balloons and slogans. The biggest celebration was traditionally organized on the Red Square in front of Lenin’s Mausoleum, with country leaders standing atop of it and waving to the crowds. Since 1992, May Day is officially called “Day of Spring and Labour”, and remains a holiday in present-day Russia. May Day parades did not fade with the fall off the USSR, however, they are not supported as broadly as they used to be in the past. Slogans have changed as well; nowadays one would not encounter “Glory to the Communist party – our vanguard” or “Soviet nation – founder of Communism!” Current slogans vary from “Spring! Modernization!” to “Power to people, not to billionaires!”

It is also important to note that in the past, May Day was a holiday that truly united the nation and greeting cards on that day were delegates of friendship. Despite of the remaining traditions for celebration, May Day greeting cards are no longer available for purchase. This section presents cards printed between 1973 and 1979.

Greeting card “the 1st of May”. Printed at “Pravda” (Moscow, 1979).
The drawing depicts Vladimir Lenin on the Red Square, surrounded with red flags

Victory Day pays tribute to the capitulation of Nazi Germany to the Soviet Union which determined the Great Patriotic War – the war between the two states as part of the Second World War. Germany signed the surrender document late in the evening of the 8 of May 1945 in Berlin, or after midnight at local Moscow time. First officially celebrated in 1946, Victory Day became a public holiday in 1965. During the times of  Soviet Union, 9 May was celebrated all over the USSR and Warsaw Pact countries (or Eastern Block: Albania, Bulgaria, East Germany, Hungary, Poland, Romania, USSR). In present-day Russia, 9 May remains a broadly celebrated and truly uniting holiday. It is worth noting that Victory Day is the only public holiday with historical background that did not lose its importance and meaning. Unlike the day of Consent and Reconciliation, the reasons for celebrations on the 9th of May are clear to every Russian person. The focus of these celebrations is not related to military parades on the Red Square, but the hearts of veterans and their descendants, for it is a family festive occasion as much as a state holiday.

Despite the ultimate recognition of Victory Day, greeting cards devoted to this memorable date are no longer available. One of the reasons for it could possibly be the decreasing number of veterans alive. From mid-1990s these greeting cards became custom-made, designed by order of the country or province authorities. This section presents cards printed between 1974 and 2000.

Thank you for visiting the exhibition! The next thematic exhibition will be dedicated to the Great October Revolution Day.